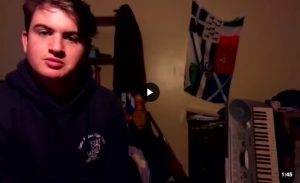 How long do languages last? Already it’s not uncommon to hear children of immigrants admit they don’t speak their grandparents’ native tongue that well. What about their children and grandchildren? What does it take to save a language?

Here’s a story from the Isle of Man, stuck in the Irish Sea between England and Ireland. In 2009, UNESCO declared the traditional language of the Island, Manx, extinct. A recent story in the New York Times explained, “For centuries, Manx — part of the Celtic language family like Irish and Scottish Gaelic — was how people on the island communicated in their everyday lives. But by the 19th century, the English language had overtaken it, and many on the Isle of Man raised their children to speak only English amid an increasingly derogatory, sometimes even hostile, attitude toward Manx.”

But the islanders did not uniformly buy the argument that their language was dead. Residents pushed to save the old tongue, promoting its use as part of the local school curriculum in addition other tactics. Read the complete story, An Ancient Language, Once on the Brink, Is a British Isle’s Talk of the Town, here.