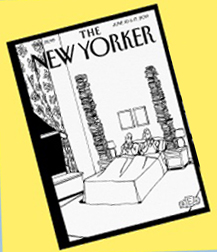 Here’s a Tip of the Week a step outside the usual — the short story, Lu, Reshaping, by Madeleine Thien, which recently appeared in the New Yorker magazine. In the broadest terms, it’s a story about a Chinese immigrant’s struggle to make emotional sense of a life in the United States.

In some respects it’s a familiar saga. The female protagonist must rely on her pre-teen daughter to clean up the English in her writing for work. With her work-mates she is the Other, stuck just outside their easy companionship. People with less experience climb up the ladder while she remains stuck. At home she’s alienated from her husband, who is more a pragmatic associate than lover. Hence a series of secret affairs.

For Exchange readers there’s a particular bonus — the story contains a fascinating trove of Chinese idioms that render emotional states into unexpected language. Read the piece to discover the context and meaning of sayings such as, Did a ghost hit the back of your head?; Stop kicking tangerines around; and, I have eaten more salt than you have eaten rice.