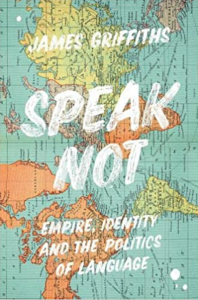 Having others understand the language you speak is one thing, but having your language survive in the face of globalization is another. That’s the subject that James Griffith takes on in his book, Speak Not: Empire, Identity and the Politics of Language.

You’ll get insight here on how technology both hurts and helps in the fight against minority language extinction. Griffiths explains how languages hang on, the costs when they don’t, and how indigenous tongues can be walked back from the ledge of permanent loss.

The book is garnering reviews in, among other publications, the New Yorker and the LA Review of Books, which called Speak Not “a stimulating work on the politics of language.”