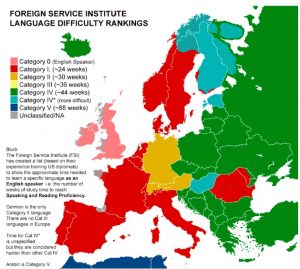 When it comes to learning a new language, not all tongues are created equal. Some offer a much rockier path to fluency for native English speakers. Consider this analysis by the Foreign Service Institute on how tough it is for English speakers to learn various languages.

Want to make it easy on yourself? Try learning Afrikaans, Danish, Dutch, French, Italian, Norwegian, Portuguese, Spanish or Swedish. Figure on about 600 hours of study to achieve what the Institute declares “General Professional Proficiency in Speaking.”

Or maybe you’d rather descend into a pit of confusion? Sign up for classes in languages that are particularly difficult for native English speakers. For starters, Arabic, Cantonese, Mandarin or Korean occupy this category. For the particularly ambitious, there’s Japanese, which the Institute judges to be even more difficult for learners than the other toughest languages. Count on spending at least 2,200 hours of study in these languages to reach the General Professional Proficiency level.

The take home here? It’s another point of reflection regarding the difficulties immigrants and refugees encounter while building a new life. If it’s tough for an English speaker to learn Japanese, what’s it like for a Hmong immigrant to straighten out the many confusions offered up by English?