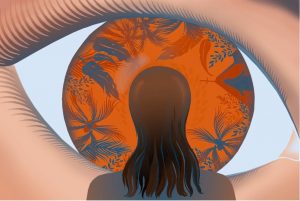 Here’s a moving essay about a college student’s effort to understand more about the escape her grandmother made from the Philippines to the United States. Seeing My Heritage through My Grandmother’s Eyes is another of those stories that point out the immense gulf between the current moment and the world as it existed during and immediately after World War II.

Essayist Isabel Guarco’s orphaned grandmother, born in Manila in 1923, lived under Japanese occupation through the war years. Shortly after the armistice she fled to this country on a war bride ship. Guarco recounts her own trip to Manila to try to trace her grandmother’s life in the city. Except for a ledger line in an orphanage’s records, she finds, that world has largely disappeared.

It’s a story that reveals, again, the difficult path undertaken by so many immigrants and refugees, and how quickly the circumstance that provoked their exodus disappears in the mist of history.