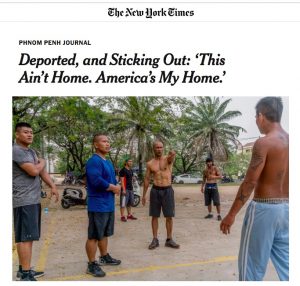 With the Trump administration poised to deport a large group of legal Cambodian immigrants to the United States, among the questions that arise is, How will those booted from the US adapt to Cambodia, a country that in many cases they’ve never known?

For a glimpse of what awaits them in Phnom Penh, check out this New York Times piece, “Deported and Sticking Out: ‘This Ain’t Home. America’s My Home.'”

For a more detailed look at the politics behind the Trump deportation order, see “Dozens More Cambodian Immigrant to Be Deported from US, Officials Say.” A more Minnesota-specific account of how this deportation plan has roiled the local Southeast Asian community — “Deportation proposal shakes Minnesota’s Southeast Asian refugee community” — appeared in the StarTribune.

According to a Macalester College tally, Minnesota has the sixth largest population of Cambodian refugees — 5,530 — in the United States.